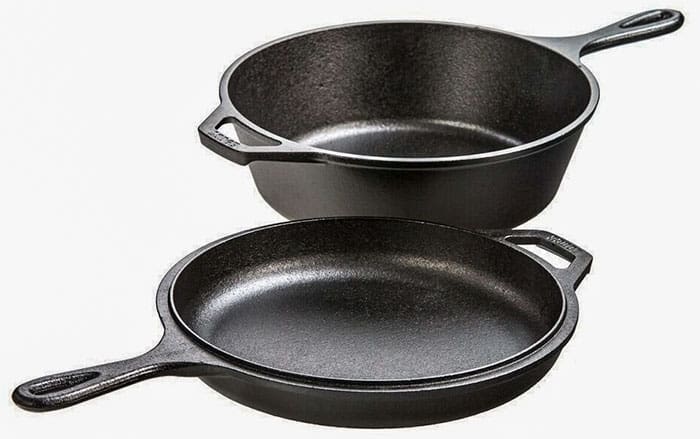 If you only want to get one cast-iron skillet, the Lodge 3 Quart Cast Iron Combo Cooker is the one. It is so much more than just a pan or pot. It is an incredible combo.

In terms of functionality, the Lodge Combo Cooker is one of our most flexible utensils. It may be used as a traditional pan as well as a roasting pan for roasting vegetables. Almost everything can be baked, broiled, boiled, fried, grilled, roasted, sautéed, and seared. Furthermore, it is quite well-processed, and the price is extremely cheap.

The downsides include the weight and the sensitivity to rusting that they have. You can get by with either, and the susceptibility to rust is the same as it is with other iron pans, which is good news.

Lodge is a family-owned company based in South Pittsburg (Tennessee). It was originally founded by Joseph Lodge in 1896. With over 100 years of experience, Lodge has become renowned for producing the finest cast iron cookware in the world. In fact, it is the only remaining manufacturer of cast iron cookware in the USA! The company is probably best known for its Dutch Oven.

The disadvantages: the weight and the susceptibility to rust if treated wrong. You can live with both, and the rust problem is the same with other iron pans.

The lodge Combo-Cooker is very often used in my kitchen. The combination pot / high pan and low pan can be used for many purposes.

The Combo-Cooker is made in the USA. It consists of a pan and a kind of pot, both with a diameter of 10 inches / 26 cm. The pan has a height of 1.6 inches / 4,1 cm. Both are made of cast iron. The pot and pan each have a counter handle to make them easier to hold. The pans arrive already seasoned, which is very convenient. Additional seasoning is not absolutely necessary. The workmanship is excellent, these pans last forever.

The biggest disadvantage of the Lodge Combo-Cooker: it is very heavy. The skillet and pot weigh 13.2 pounds / 6 kg together, the pan 6.6 pounds / 3 kg of which, the pot 6.6 pounds / 3 kg as well. This makes the two parts the heaviest cookware we have ever tested. Swiveling the pan becomes very tiring in the long run. Therefore, the two pans have only a short handle: with a longer handle, the pans could hardly be lifted. Due to the opposite grips, however, the pan and pot can be lifted easily. However, it is hardly possible to swivel the pan.

But their weight is also their great strength: the pans can store a great deal of energy. That’s why the Combo Cooker is so suitable for baking bread: it replaces a hot stone and serves as a vessel to hold the steam.
This allows the bread to rise much better and gives it a better crust. The flat pan is also very good for baking pizzas, and here too it replaces a pizza stone.

We found a better crust could be produced with a cast-iron pan than with a pizza stone. This is because the iron pan stores more heat and releases it into the food. The combination also cuts a very good figure on the grill and open fire, the cast iron easily withstands high temperatures.

Thermal Properties of the Skillet

You will be able to pass the Lodge Combo Cooker on to your grandchildren if you treat it right. A recommendation which we are happy to make. Due to the thickness of the material, nothing distorts this cookware. The only thing that can harm the Lodge Combo Cooker is rust. Therefore, dry your pan immediately after cleaning. 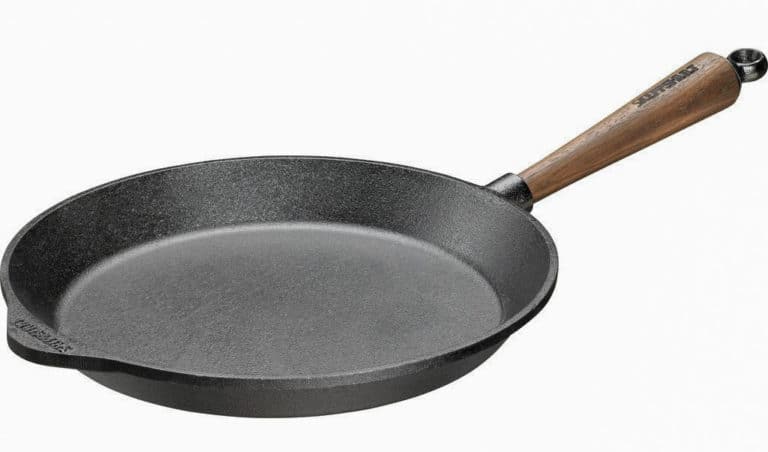 Looking for the most beautiful cast iron pan? Then you must look for our Skeppshult Cast Iron Frying Pan review. You will fall in love with this pan 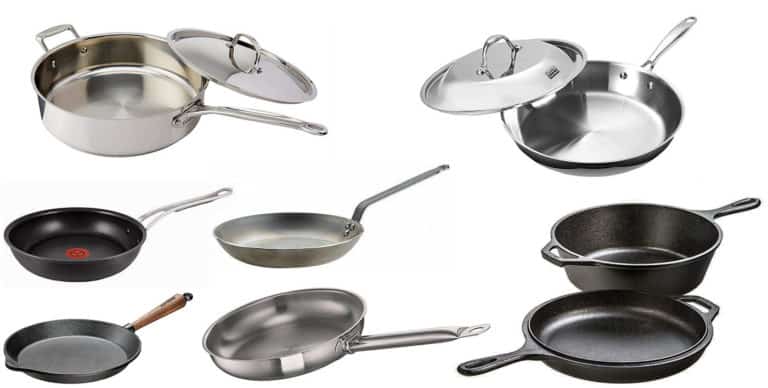 We tested many pans over the years. Here is our list of the best skillet for your kitchen. This pans are the ones we still use every day when we cook. 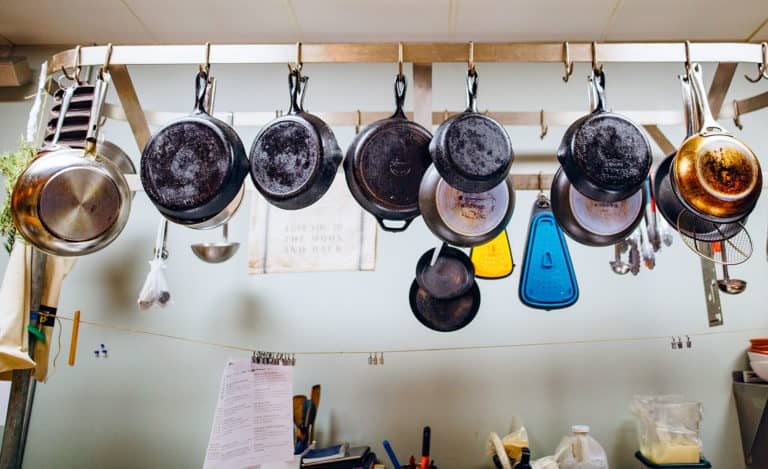 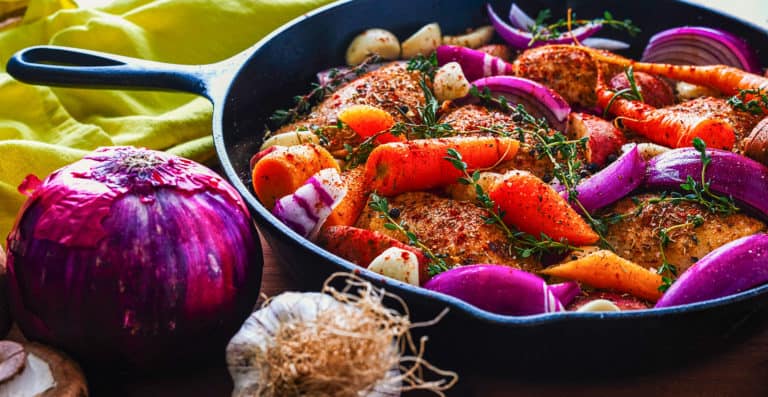 If you are looking for a new pan or skillet but are overwhelmed with the different models out there. We have the ultimate guide to find the perfect pan. 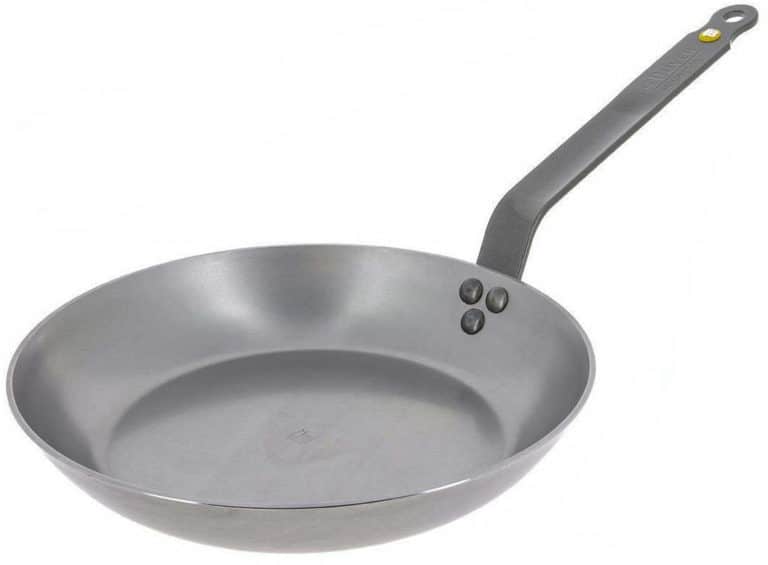 We tested several wrought iron pans: The De Buyer Mineral B pan has the best value for money and is the best wrought iron frying pan for us! You can read the full review here! What is a forged Pan? Forged pans, as opposed to cast iron pans, are made into pans in a single…